An Interview with Chuck Jordan 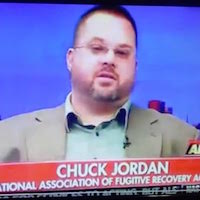 Chuck Jordan became the elected president of the National Association of Fugitive Recovery Agents (NAFRA) by a majority vote in 2011.

Prior to this honorable position, Jordan served as an elected official and law enforcement officer in Pennsylvania. He has held a professional bail bondsman license through the Pennsylvania Department of Insurance and has far-reaching experience in fugitive recovery. His work for one of these clients, Harco Insurance, involved recovering millions of dollars in forfeitures.

Chuck Jordan has widespread experience in Youth Justice and Corrections. He worked for the New Zealand Government in various areas including an Inland Revenue Agent and as an advisor to the National Office Policy Makers at the Ministry of Social Development.

Today, Mr. Jordan is the CEO of Metro Court Services, Inc., a private investigation, legal support, process service and fugitive recovery consultation service. We thank him for taking the time to share his experiences with us today.

Many people are not aware of the bail business and how it works- can you elaborate on how you became involved as a bounty hunter?

A friend owned a bail bond company and introduced me to the recovery side of the business. I asked if I could tag along on a recovery and found the experience to be very interesting so I decided to pursue the profession further.

How has the profession changed since you first became involved?

When I started, the profession was very low profile. Most people outside the industry, the courts and law enforcement, didn’t even know the profession existed. With the advent of reality television shows the profession has a much higher profile. There are a lot more people trying to enter the profession and a lot more scrutiny from the media. Also, the internet, particularly social media i.e. Facebook, Twitter etc. have been a game changer in how fugitive investigations are conducted.

As you look at your career can you name one case that stands out as one that drew upon all of your skills and experience? Please elaborate.

In 2004, Capitol Bonding went bankrupt and left their insurers such as Harco Insurance holding the bag on millions of dollars in forfeitures in courts across the country. Immigration bonds in particular had a very high percentage of failure to appear and subsequent forfeitures. I was one of the Fugitive Recovery Agents contracted to clean up the forfeiture mess created by poor underwriting at Capitol Bonding. Prior to this I hadn’t done immigration bond recovery and it turned out to be far more complicated and challenging than the usual domestic criminal defendant. Because of poor underwriting many files had scant information and no photo so I had little to work with. Also, illegal immigrants often have no social security number, driver’s license or credit history so the usual identifiers were of no help, not to mention that illegal immigrants sometimes “borrow” the identification of US citizens to obtain employment, housing, etc.

One of my first cases involved a Chinese national that was arrested by ICE in Philadelphia for immigration violations. The first point of contact in every bail bond fugitive recovery case is the indemnitor and this case was no different. I tracked down the indemnitor who also happened to be a Chinese national. He was working as a dishwasher at a restaurant in Philadelphia and he didn’t speak English, so I had to get another employee to translate.

It became obvious early in the discussion that the indemnitor would be of no assistance, and I suspected that the indemnitor may not even know the skip (defendant), which was a very unusual scenario. I quickly came to the realization that immigration cases would require a very different approach, but what I had to figure out was what the approach needed to be. To do this I would have to think outside the box and apply my investigative skills in unknown territory.

One of the few pieces of information I had was a telephone number listed on the application that I traced to an address in a small Pennsylvania town, hundreds of miles from Philadelphia. I visited the address to interview the residents, a grandmotherly-looking Chinese woman answered the door but claimed to speak no English, and she was looking after several very young children, which were an important consideration when deciding how to proceed. I was able to get her to call her son who spoke some English; he agreed to come there to speak with me.

Within 15 minutes the son arrived and he said that neither he nor his mother knew the man I was looking for and they did not object to me searching the home to ensure the skip wasn’t there. I conducted a casual search, keeping in mind that children were present as their safety was the primary consideration. My search turned up nothing and I left feeling a bit discouraged.

As I sat in my car pondering the case, I began to look for any kind of correlation and one thing that came to mind was that the indemnitor worked at a restaurant. Perhaps he was connected to the skip through this type of work, so I decided to see if there were any Chinese restaurants in the area. There turned out to only be one in the whole area, so I decided that is where I would have lunch that day.

Unfortunately I didn’t get to eat lunch because when I arrived at the restaurant the guy I had just interviewed was standing behind the cash register and as soon as I walked in, another guy fitting the description of my skip was working there and quickly ducked into the bathroom. When this guy exited the bathroom, my partner and I were able to ascertain that he was our skip and we apprehended him without incident.

What skills or educational experiences would you advise someone who wants to become a bounty hunter to acquire?

Skip tracing and interviewing skills are paramount to being successful in this industry and tactical training in defensive tactics and mechanics of arrest are necessary to safely make an apprehension. People with law enforcement, military, collections, social work or human services experience would make good use of their skills and experience if they applied them to this profession.

What are two or three of the biggest challenges that a new bounty hunter would face when entering the field?

Getting your foot in the door. This is a relationship business and most Bail Bond Companies are not very receptive to being cold called by people they don’t know looking for recovery work. And finding a good mentor, having the right person to show you how the industry works and how the job should be done effectively and legally will be the difference between success and failure.

If you could do anything differently in building your career, what different turns would you take, if any?

When first starting out I took on a lot of low paying cases that when calculating the hours I put into them I was making less than the minimum wage (i.e. putting 60 hours and $200 of my own fuel into a case that only paid $500). As a new Fugitive Recovery Agent a person should not expect to make much as the majority of their pay will come in the form of on the job education, experience etc.… but once you become proficient in the trade and have a solid track record you should never sell your services short. Always have a contract and ensure that you are fairly remunerated for your work.

In your view, what are the three most important and positive benefits of being a bounty hunter?

Being able to work autonomously, travel, and having the potential to profit from the level of skill and of effort you can put into the job.

In your view, what is the biggest challenge of being a bounty hunter?

Being self-employed means that you also have to be self-motivated because it’s up to you how hard and how much you are going to work. Unlike most jobs with salary or hourly pay, this job doesn’t pay anything unless you get results.

Is there any further advice you would share with students considering bounty hunting as a career?

Yes, don’t quit your day job!!! Most fugitive recovery agents have other jobs or sources of income because this is a very unpredictable business. Unless you are located in a large metropolitan area and have a steady flow of cases you will need to supplement your income. Many fugitive recovery agents also write bonds or do process serving and private investigations. As the saying goes… don’t put all your fish in one barrel. If someone, particularly someone trying to sell you something, tells you that you can get rich quick by becoming a bounty hunter, don’t walk away, RUN!!!!!